I was asked why I didn’t knit to sell when I was unemployed during the worst of the great recession. I said it was because nobody I knew could afford $500 sweaters. I don’t design, so there’s also the issue of using others patterns, which nobody got, either.

I think it’s most economically feasible to sell patterns to knitters rather than hand knit garments to non-knitters. Have you tried figuring out how many patterns you’d have to sell at, say, $8 to break even for designing one?

And that’s the entire point of this mini series on cost estimating my projects.

Let’s review one of my more successful single patterns: Kitty Selbu. This mitten pattern was inspired by my cat’s healthy scare. (Note: we lost the kitty, eventually.) The pattern sells in my Ravelry store for $6.00. For simplicity’s sake, let’s look only at the Ravelry sales, which accounts for the vast majority of my single pattern sales. 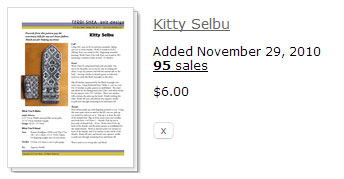 I have grossed $570 in Ravelry sales on this pattern since November 2010.

I have made many pairs of Selbu mittens, so I can, from my experience and the time tracking I performed on the mitts, estimate that I spent about 30 hours labor on these mittens, and an additional 3 hours in photography, layout, and publishing. At my bare minimum wage, that’s an estimated $330 invested in the creation of this pattern.

Leaving aside costs that a business would normally need to include, such as office space to work in, electricity to run the lights and computers, and so forth, I can then calculate that I have profited $240 from the sale of this one pattern. Since November 2010.

So to answer the basic question, I would need to sell 55 patterns at $6 to break even.

This begs the question: what is a pattern worth? How much can I charge for a pattern, to increase my profits, before I drive away sales with a too-high price tag?

Let’s do some more competitive analysis. This time I’m focusing on patterns, and for that, I go to Ravelry.com.

These are the most popular for-sale patterns. There are several ways I can interpret this review. $6.00 seems to be a reasonable price for a mitten pattern.In fact, it’s fairly median.

Another observation is that most of these patterns are worked in worsted weight yarn, and decorated with a texture pattern rather than colorwork. People buy what they want, so knitters apparently prefer textured mittens at a larger gauge to fine stranded work.

But there’s a larger point that only reviewing for-sale patterns completely overlooks.

Of the top 25 mitten patterns on Ravelry, only nine of them cost money. The other 16 are free.

I can surmise from this that knitters are willing to pay a small price for a pattern that suits their preferences – textured worsted weight – but most would choose a free pattern over a paid one. In fact, only seven of the top twenty five used colorwork in any technique at all, aside from very large stripes or self-striping yarn, and of those, only four used stranded knitting.

My patterns don’t even show up in the top 100 most popular designs.

So why is that?

This entry was posted in Knitting and tagged business, competitive analysis, knitting, Ravelry. Bookmark the permalink.

2 Responses to What’s it worth?